Halloween event is now LIVE!
All creatures on Faloria will now have a chance to drop "Halloween Tokens".
Depending on the monsters difficulty, more or less tokens may drop.
These tokens can then be taken to "Pomperipossa" in either Rookgaard or Thais to change for items only obtainable during the Halloween event.
The shop has also been updated with some new spooky tiles that will only be available for Halloween as well, and the coffin bed has been put on sale during this time.
Happy Halloween!

Between October the 28th and November the 6th Faloria will enable the Halloween event!
During this time, monsters on Faloria (mainland & rookgaard) will drop Halloween tokens which can be used to purchase unique and fun items to get into a festive mood!
On October the 31st at 21.00 CEST the Haunted Pumpkin will invade our world. Slay it with your friends and reap the rewards!
Happy Halloween!

Kastah update is now LIVE on Faloria!
Visit Alexander in Edron to explore this new island.
Below is an image of some of the new creatures and items that you may find in this update. 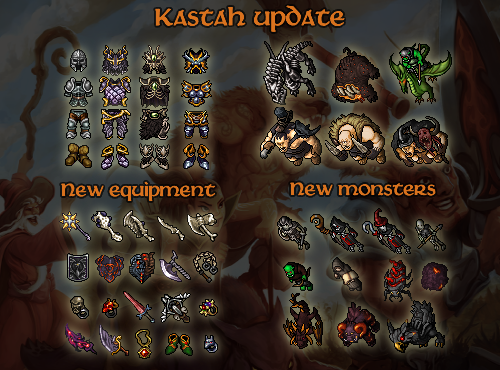 You may now watch the final spoiler for Kastah - Our trailer.
Kastah is launched at Server Save on September 11th.

We have now published three new rule-clarifications to the website which will apply from Server Save on Wednesday (3/8).

Please make sure you read through them and understand them. If you have any questions related to these new rules, please visit our Discord and the attached news-thread.

Rule 9b
Manipulating computer inputs to constantly cast a spell on your character while being AFK is strictly forbidden on Faloria.

Rule 9d
Infraction of any rule defined under 9 (9a, 9b, 9c) will result in a banishment of all accounts related to the owner.

You can always read the full rule-set here